A beautiful nose consistent with the rest of the facial features is one of the main signs of beauty, in addition to the important functional role of the nose in the process of breathing and speech Any person may be exposed to many problems, especially if it comes to the nose, which is characterized by being prepared for the proper breathing process and at the same time being one of the aesthetic parts of the human face, and poets have always sung about the beauty of the nose, however, some people often face problems such as broken nasal bones, a caked nose, narrow nostrils or unequal or wide، Which harms the breathing process and the person loses the desired aesthetic appearance

How is rhinoplasty performed

Dr. Samir Gharaba performs rhinoplasty surgery by the closed or open method, according to each case and what you need. The difference between the two methods is a simple cut in the bottom of the nose that does not leave any traces used in the open method

The surgery mainly depends on modifying the cartilage and bones of the nose and the nasal septum to get a beautiful nose and excellent breathing. The surgery that Dr. Samir performs is called functional rhinoplasty, meaning that it treats functional problems and adjusts the shape to reach the desired aesthetic shape

The surgery is performed under the influence of general anesthesia and takes an average of two hours. The patient leaves the hospital on the same day, and an external stent is used for a week to 10 days after the surgery. Dr. Samir does not use any fillings during or after surgery

What is nose sculpting using ultrasound

The ultrasound device is used to sculpt bones very accurately. It can remove very minute parts of the bones and move the bones accurately and without any injuries to the important soft tissues such as nerves and blood vessels near the bones of the nose, in contrast to the traditional methods that are used in other centers for the procedure surgery. This method has many benefits, the first of which is the extreme accuracy in implementing the steps of the surgery to ensure distinctive results in addition to avoiding injuries to blood vessels and nearby nerves and a faster recovery period without any pain Bone healing is faster and better than traditional surgery 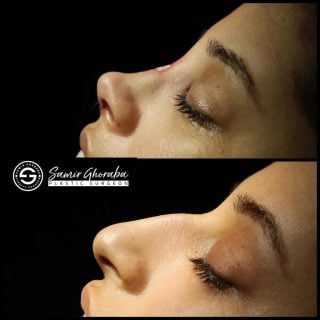 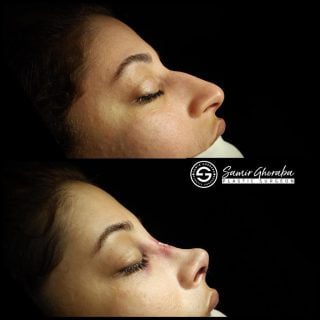 When is cartilage from the ear or rib cage used

Dr. Samir Ghoraba uses cartilage from the rib cage or the ear, according to the needs of each case, to support the structure of the nose, in certain cases, the most important of which are

Severe deviations of the nasal septum

It is normal for swelling after the operation for the first three days Which will reduce most of it gradually within 2-3 weeks, knowing that there will remain a very small percentage of the tumor, which will disappear after a year

The patient adheres to a light diet, where he starts drinking warm water and fluids after the operation and then moves to normal food the day after the surgery while avoiding foods that need to be chewed a lot

There is a possibility of bleeding from the nose for 3-4 days after the operation. Avoid itching and pulling on the nose when wiping the bleeding

Stay away from strenuous activities, lifting heavy objects, bending and violent movement for a period of 3 weeks

The cast is removed 10 days after the operation

After removing the splint, avoid wearing glasses and objects that rest on the nose for at least two months

There may be a feeling of stiffness or numbness in the front of the nose, which will gradually reduce and return to the practice of his life

nextModern microscopic surgery between the present and the future